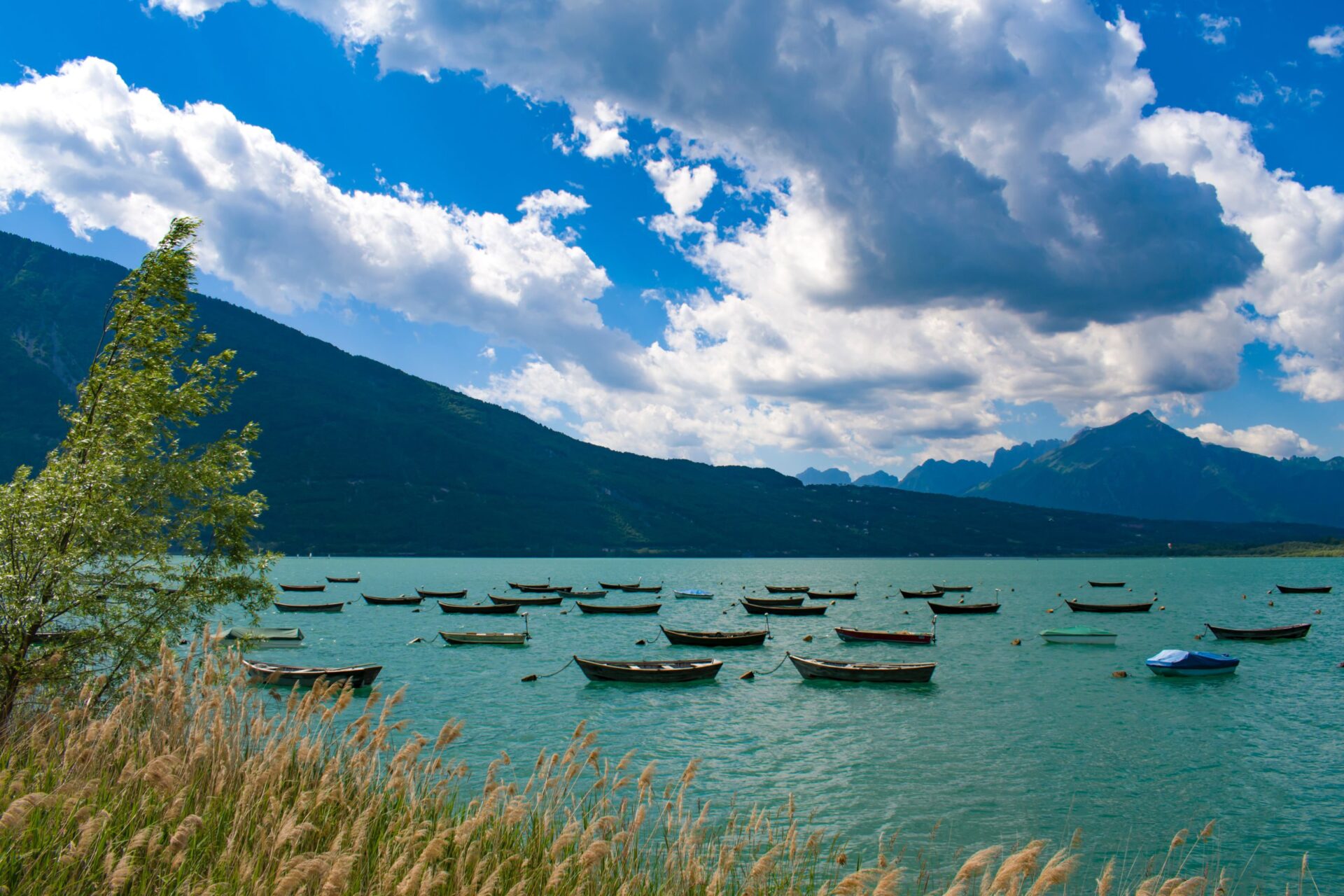 Lake Santa Croce is a natural lake (whose basin was artificially enlarged in the 1930s) located in Alpago, by the Venetian prealps.

The main tributaries of the lake are the “Cellina Canal”, which collects the waters of the Piave river in the nearby town of Soverzene, and the Tesa stream. The lake has only one outlet, the “Rai Canal” which serves as a safety measure in case of flooding of the lake, by redirecting some of the excess water back into the Piave river in case of emergency.

Until the mid 18th century the lake had no outlet, but the proximity of Cansiglio and its quality timber production, prompted the excavation of the Rai stream, 7 km long, which led into the river Piave.

The inhabited centers around the lake are:

Furthermore, the entire western side of the lake is crossed by the Alemagna state road 51, which was the main communication route between the province of Treviso and the province of Belluno until 1995, the year in which the motorway A27 was extended through the area.

There is still no absolute clarity on the origins of the lake, especially in terms of timing & succession of events, as well as on the precise role of river Piave in the formation of the lake.

Some geologists in the past believed that river Piave pointing towards Lake Santa Croce and then abruptly turning, indicates that in ancient times this river actually descended towards the sea passing through Alpago and through Treviso’s north side, a passage subsequently masked by glacial phenomena and landslides.

More recent research confirmed this assumption and clarified that the waters of river Piave changed their course only after the retreat of the Pleistocene glaciers, and precisely after the formation of a “natural dam” at the bottom of Lake Santa Croce caused by landslides in the area.

Lake Santa Croce, with a water capacity of about 120 million cubic meters, is barred to the north by a dam that raises its level to 386 m in the town of Bastia, and is the vital centre of the “Santa Croce and Piave” hydroelectric plant system managed by Enel (Italian national energy company).

The first plants were built in 1913 (Fadalto Vecchia & Nove Vecchia power plants) on the initiative of the Italian Society for the Utilization of the Hydraulic Forces of Veneto, commonly known as the “Cellina” Company, which was later absorbed by other companies until finally being controlled by Enel.

Water deviation from river Piave is conveyed into Lake Santa Croce and is carried out near the nearby town of Soverzene, at an altitude of 390 m above sea level. This is made possible by a transverse dam of about 1 km in length. A channel of 10 km, partly in tunnels and partly in the open, then conveys the water into the lake, from which it subsequently feeds the power plants of Fadalto, Nove and San Floriano.

The cycle ends with the return of the waters partly to river Piave (near Colfosco), and partly to the Livenza river (near Francenigo), where most of it is destined for agricultural irrigation.

The Fadalto Nuova power station, also the most powerful, receives pressurised water from Lake Santa Croce through a 2.5 km tunnel, and is capable of developing 210 MW of power.

Overall, the total power of the hydroelectric plants of the Santa Croce & Piave system is equal to 338.4 MW, with a total average annual production of 1029.1 GWh.

As discussed on this post, Lake Santa Croce experiences thermic winds every day between spring and winter, especially when the weather is sunny in Alpago and colder in the Venetian plains. The temperature difference is the main source of winds, which makes Lake Santa Croce an incredible spot for kitesurfing, windsurfing and other water sports.