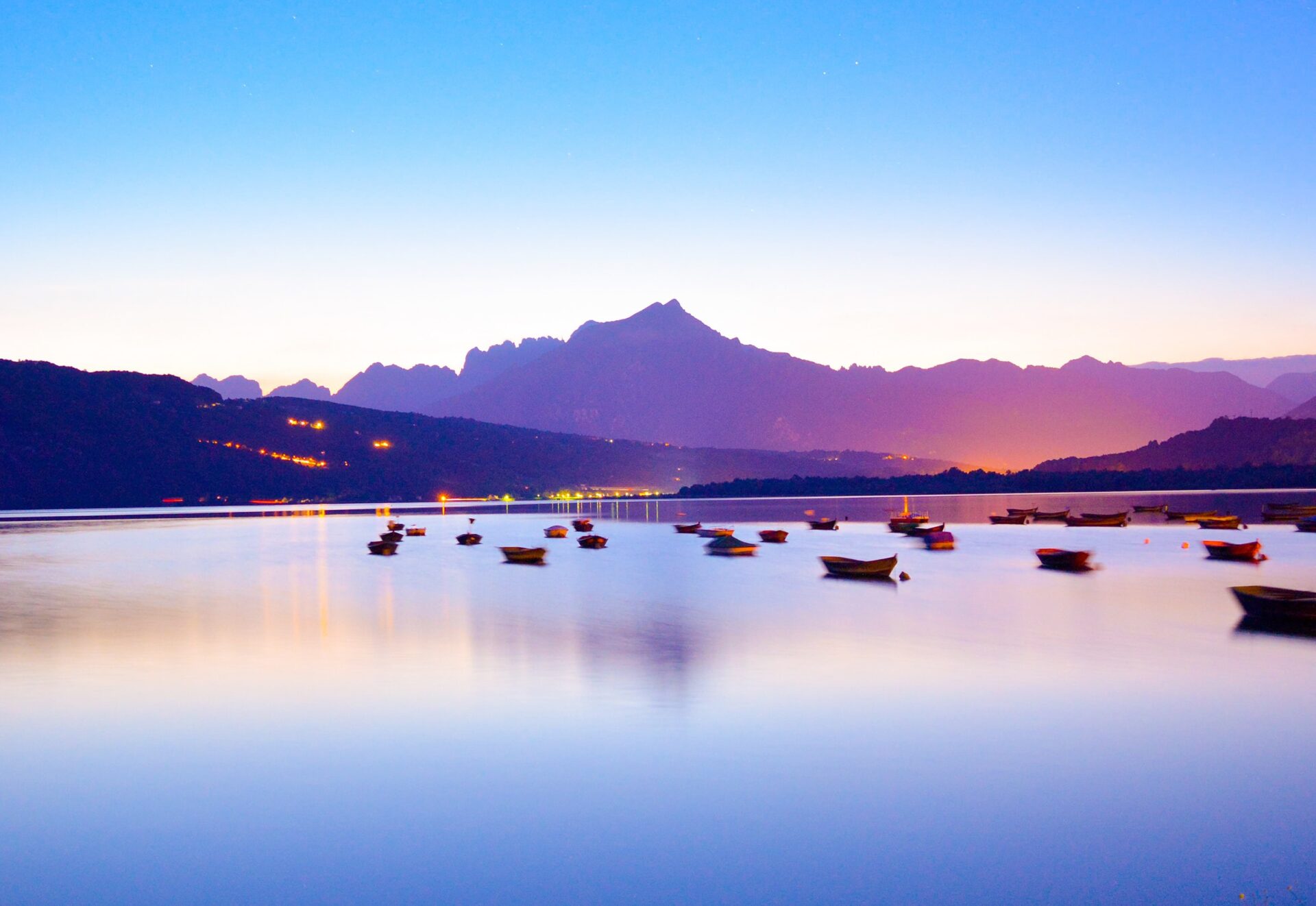 Alpago is a fertile ground for various kinds of sporting events, from small local competitions to international events such as the Giro d’Italia biking competition, the Italian MTB Championships in Chies d’Alpago, or the Transcavallo ski-alp event. In general, when we talk about touring around lake Santa Croce, we can refer to two different scenarios:

What is the road perimeter of Lake Santa Croce?

The shortest possible tour around Lake Santa Croce is 14.4 km, which can be covered entirely by road. This path includes bits of roads SP423, the SS 51 Alemagna and a piece of the SP422.

Starting from the main square in Puos d’Alpago, however, the tour around the lake is about 17.4 km. This route is the one used during the sporting and charity event in August. The tour of the lake of Santa Croce on foot can instead be done on a very similar route, but passing through white gravel roads and pedestrian areas. However, there are still pieces that need to be walked on the road, especially in the section of state road 51 on the west side of the lake.

How long does it take to go around the lake of Santa Croce?

Assuming the shortest journey of about 14 kilometres and a relaxed pace, it takes 30 to 45 minutes to cycle around the lake of Santa Croce. To walk around lake Santa Croce, on the other hand, considering a quiet walking pace, it takes between two to three hours in total.

The charity event tour around lake of Santa Croce:

In 1995, after a couple of years of attempts in setting up a competition, about 80 Alpago residents took part in the first non-competitive edition of the cycling event, which only later took the name of Giro del lago di Santa Croce. In the following years, participation in the event increased to an ever greater extent, with the support of institutions and non-profit associations.

To date, the event has reached such a scale as to attract people not only from Alpago, but also from other parts of Italy and Europe. Suffice it to say that the last edition (pre-pandemic) of 2019 exceeded 5,000 participants.

While the original initiative was only for going around Lake Santa Croce by bike or Handbike, today there is also a Running version and a Skate version, starting at the same location in Puos d’Alpago. The bicycle tour proceeds towards Farra, Poiatte, Santa Croce del Lago, La Secca, Bastia and finally returns to Puos.

Walking: The walking event is called Pedonata, and has been part of the event since 2017. Departure and arrival are the same as for the classic Lake Santa Croce Bike Tour, but with a distance of only 7 km. The pedestrian path passes along the bank of river Tesa, then through the sports facilities in Puos, and from Puos towards Farra, then crosses the naturalistic oasis path close to the lake of Santa Croce, before reaching the town of Bastia and going up along the cycle path to Puos, and finally onto the finish line.

Skating: The most recent addition to the event is La Pattinata [skating], introduced on the occasion of the 25th anniversary of the event in 2019, with departure and arrival shared with the bike and run versions of the event. The track for skates is 4.8 km long, entirely flat and on a paved road. It winds along via al Lago and via Turatti, from Puos towards Farra, before turning right into via Matteotti and then reaching the roundabout that leads to via Roma, the long straight that leads to the finish.

Purpose of the event:

The purpose of the Santa Croce Lake Tour is (and has been for over 25 years) to raise funds to support the “Via di Natale” Association in Pordenone, as well as the Cucchini Association of Belluno, both operating with terminal cancer patients, providing them with palliative and pain management solutions, as well as support for their families.